The Vanishing Act of Esme Lennox 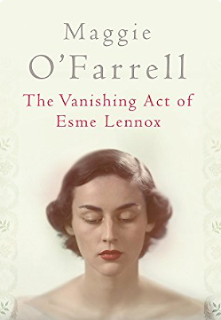 I acquired this book from my good friend Chris, and I almost laughed when I started reading it, because if you were writing a book calculated to appeal to Chris, The Vanishing Act of Esme Lennox would be that book. For a start, it's set in Scotland, Chris's ancestral home and a country where she lived for several years; and it's also concerned with madness, and the way notions of madness and hysteria have been used to oppress women, which is a topic which has fascinated her for decades.

Our contemporary protagonist, Iris, discovers to her dismay that she has a elderly relative whose existence she has never known about: Esme Lennox, her grandmother's sister, who has been held in a mental hospital for over sixty years, since she was just sixteen years old. Through Esme's memories and the dementia-affected musings of Iris's grandmother Kitty, we gradually learn the story of how Esme ended up in Cauldstone, uncovering some dark secrets along the way.

I haven't read any of Maggie O'Farrell's fiction before but The Vanishing Act of Esme Lennox is well-crafted story-telling. I wasn't a massive fan of the subplot concerning Iris's step-brother Alex, which I felt didn't add much to the central story, but otherwise I really enjoyed this novel.