The Meeting of the Waters 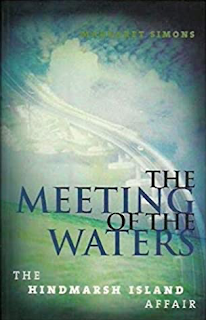 This is the third time I've read Margaret Simons' account of the Hindmarsh Island affair, The Meeting of the Waters. It's a long and complicated story, and it all happened over twenty years ago -- I'm not sure if many people retain a clear memory of what went on. Essentially, developers were seeking to build a bridge between the South Australian town of Goolwa and Hindmarsh Island at the mouth of the Murray River, where they wanted to set up a marina. The local Aboriginal community (principally the older women) were dismayed at the idea of a bridge, because this trampled on the sacred nature of this particular site; however, the precise knowledge about the stories that made the site sacred were deeply secret. Eventually another group of women emerged who denied any knowledge of the sacred secrets. The original group were accused of fabricating 'secret women's business' (that's where the phrase came from!) and after much legal and political wrangling, the bridge was built.

There is so much meat in this story, which deals with the clash of two incompatible cultures, different kinds of power, respect and knowledge and pain.

... it is like an opera. There are so many voices, all singing their own songs with such conviction. the emotions are huge, the narrative grand, almost everyone is infected with a sense of wounded righteousness, and sometimes it seems like a thousand small tragedies harnessed together.

The case dragged on for years, through court cases, inquiries and a Royal Commission. It ripped a community apart, destroyed relationships and ruined careers. The phrase 'secret women's business' was used to discredit Indigenous heritage, despite the last inquiry finding that the stories were not invented. There was a fundamental conflict between a Western European culture that ostensibly values transparency, openness, an adversarial legal system where the strongest argument and the loudest voice often wins, and an Indigenous culture that prizes sacred knowledge by restricting who can know what, and keeping the most precious information secret. As Simons points out:

Information follows the lines of power. Aboriginal cultures make this explicit. Western European culture... likes to pretend that it isn't necessarily so.

It was difficult for politicians and judges to understand that the women were prepared to withdraw evidence and keep their knowledge secret, even at the cost of losing their case and the bridge going ahead. Protecting the sacred secrets was ultimately more important than protecting the country they were linked to. The women insisted that the part of the story they were prepared to share should be kept in a sealed envelope, to be read only by a few women if absolutely necessary. But a judge held that Australian law required that the relevant government minister himself must be able to read the material. (He could have appointed a woman to act for him for this purpose, but he refused to do so.) In desperation, the women gradually revealed more and more; but it was never enough.

There was no recognition of the fact that all Aboriginal women in the same community might not have access to the same level of knowledge. Indeed, most of the 'dissident' women didn't actually deny that such sacred knowledge existed, only that they didn't know about it, but such subtleties were lost in the media outcry about 'lies' and hysteria over land rights. Part of the sacredness of the area centred around the resemblance of the area of the river mouth to a woman's body. Some politicians scoffed at this notion: how could traditional Aboriginal people have seen this resemblance without access to an aerial view? This argument is plainly nonsense to anyone who has seen the map-like conception of country displayed in Aboriginal artworks.

You'd hope that our understanding has improved in the years that have passed since. When I was first researching for Crow Country, this book taught me a lot about how Indigenous cultures work, how they intersect and can fail to connect with white expectations, and the searing pain that this disconnect and misunderstanding can cause. It was the beginning of what has been a long and rewarding journey toward a deeper understanding.