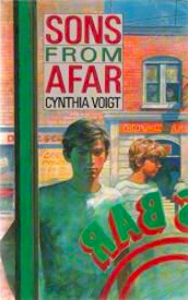 This is my edition of the sixth Tillerman book by Cynthia Voigt, Sons From Afar. It's actually my least favourite of the covers I've seen.

I like the look of this one -- all the covers on this edition of the series are beautiful, a lovely clean design --  but the illustration doesn't bear a huge amount of relevance to the story.

This version captures the dark danger of the final section of the novel, where James and Sammy trawl the mean streets of Baltimore in search of their long-vanished father.

But I also really like this cover, because the faces of the two boys exactly match the image I have of them in my mind. Sons From Afar is a book about fathers, inheritance, masculinity and choices. Sammy and James are very different characters, each slightly envious of the other's gifts. James wishes he could be physically gifted, straightforward, courageous and popular like Sammy; Sammy wonders why James isn't happier with his brains and problem-solving skills. But together they make a great team, as they belatedly come to realise that their mysterious past is less important than the choices they make for the future.
Sons From Afar moves us forward in time a few years. Dicey is largely absent from this book, away at college; Maybeth is, as usual, a quiet, enigmatic background presence. I like James getting an office job with the two lady doctors (they are described as 'distant cousins' but surely they are a couple!) and Sammy's growing friendship with timid Robin. There is a lot of conflict in this novel, emotional, intellectual and physical, and a variety of ways of solving it, though (spoiler) some readers may be disappointed that Sammy and James don't find the answers they were looking for.