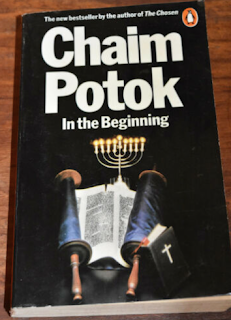 A proper grown up literary novel, the first one I've read for a long time. I read quite a few of Chaim Potok's novels in high school and was fascinated by the glimpses into a different cultural world, the world of Orthodox Judaism, that they showed to me; that fascination has never left me, as my recent television adventures with Unorthodox, Shtisel and Unchained have proved. But I haven't read In the Beginning before.

In the Beginning is an adult novel, but for most of its length David Lurie is a child or an adolescent, growing up in the Bronx during the Depression and the Second World War. We see through his eyes the hostility of the goyim, the oppression of history, and he is particularly haunted by his father's past, fighting in Poland. David is a sickly, gifted child, perpetually anxious, dreading 'accidents', and aspiring to a courage he is sure that he lacks. But in the end, the courage he finds is not physical bravery but a more demanding intellectual strength which will rip him away from the security of his tight community and family.

In the Beginning is a slow burn of a novel. Small incident piles upon incident, there is a growing sense of dread, although the violence and horror all occurs either in the past or many miles away in Nazi Germany. And I'm still fascinated that there is a world so utterly foreign to me, the world of Torah scholarship, which is so burningly important to many people and about which I know absolutely nothing.