When the Lyrebird Calls 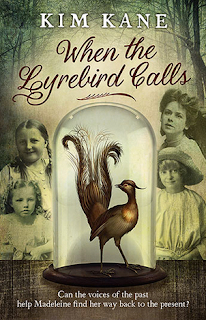 I'm not sure if this is the first time I've found myself reading three books at the same time, all by Australian women writers.

I've been meaning to read Kim Kane's time slip novel, When the Lyrebird Calls, since it first came out, and I found this copy at Brown & Bunting. My ladies' book group thought highly of it, but someone said, what a shame the cover is so drab.

Having read the book, I think the designer (ooh, I just discovered it's Debra Billson, who has produced a gorgeous design for my forthcoming middle-grade book, The January Stars) has done an amazing job of tracking down contemporary photographs that resemble the four girls in the story. And, spookily, yesterday I happened to look up that first classic Australian time-slip novel, Ruth Park's Playing Beatie Bow, and noticed the original Puffin edition cover: 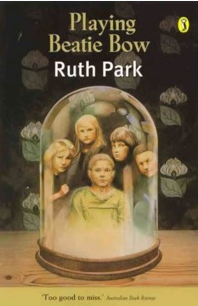 As Kim Kane makes a point of referencing Beatie Bow in her acknowledgements, the similarity in these covers can't be a coincidence. But I'm not sure how many readers, especially young readers, would pick up on the homage, particularly as it eluded a bunch of highly experienced school librarians and children's literature enthusiasts (shame on us).

Aanyway, I wasn't sure I was going to enjoy this book when it opened with a scene of three young girls destroying a fancy doll. I have a tendency to feel sorry for inanimate objects and this overt cruelty didn't endear the young protagonists to me. But once the time slip happened, I was all in. Madeleine doesn't travel back and forth but stays in 1900 for an extended period, which gives a good solid look at the issues of the time (Federation, suffrage, racism, spiritualism) as well as the tangled family dynamics of the Williamson household where Madeleine ends up. (Extra points to Gertie for attending my alma mater, PLC!) It's not till the final chapter, back in her own time, that Madeleine discovers some family secrets that make sense of what she's seen.

Kim Kane has a quirky and often humorous turn of phrase that adds to the enjoyment, and I appreciated the feminist emphasis as well as the sensitive portrayal of a young Aboriginal man (he deserves his own book, I reckon).  Loved it!
Posted by A latte beckons at 12:28 PM