An Enemy at Green Knowe 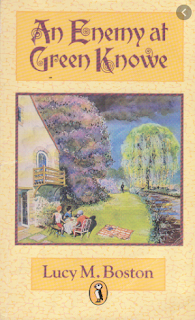 I'm reading faster than I can blog at the moment! An Enemy at Green Knowe is probably my least favourite of the Green Knowe books (I was interested to see that someone in the comments nominated it as one of their favourites). Frankly I find it quite creepy, and I don't like the idea of sinister spirits hanging round Green Knowe. The book made from a dead bat that flaps and rattles in a closed drawer; the invisible something that slithers down an outside wall; the battle between the maggots and birds, birds and cats, cats and snakes (though I love the scene when Ping calls up the ghost of Hanno the gorilla to help them); the washing line pegged with dead birds... Horror piles upon horror as Tolly, Ping and Grandmother Oldknow are besieged.

Perhaps the most disquieting episode is when Mrs Oldknow falls into a trance on the river, the hypnotic spell only broken when the boys hang the druid's stone around her neck. I hate the thought of Green Knowe and Grandmother being so vulnerable, even if she and the boys triumph in the end. Incidentally, it's the scholar Mr Pope who finally banishes the demonic Melanie, which is perhaps another reason why I don't enjoy their victory as much as I might.

It's very well done, and someone who enjoys horror and witchcraft more than I do would probably relish the battle between good and evil; but I prefer Green Knowe to be safe and impregnable!