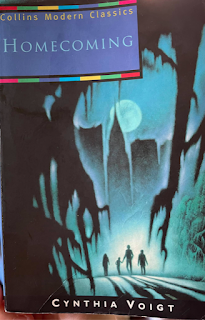 As I passed my bookshelf the other day, Cynthia Voigt's Tillerman series caught my eye. It's been a few years since I read those, I thought, might be time for another look. When I consulted my reading diary, I was amazed to see that it's been TEN YEARS since I read Homecoming! Definitely time for a re-read.

I was introduced to Homecoming through the Convent book group I used to attend, and what a wonderful gift it was. Re-reading this book I marvelled all over again at Voigt's skill, her descriptive power, the easy readability, the depth of characterisation and the wholly engaging story of this family in trouble.

This cover makes Homecoming look like a horror story, and in a way it begins like that -- four children, aged 13, 10, 9 and 6, are waiting in a car for their mother to return from the shop. But she never comes back. It's up to the eldest girl, Dicey, to lead her siblings on a long journey cross-country to a relative they've never met in search of a new home. Dicey is an extraordinary character, and the novel hinges on her courage, resilience, practical good sense, and fierce protectiveness. She makes mistakes -- what thirteen year old wouldn't? But she is far more resourceful that I would be in a similar predicament, and I'm forty years older than Dicey. I love and admire her as much as any fictional character I've met.

The other characters are just as vivid -- smart, thoughtful James, gentle Maybeth (is she slow, or just shy?) and energetic Sammy. We also meet twittery Cousin Eunice, kind college students Windy and Stewart, and eventually the children's prickly, eccentric grandmother Gram. I love the way that Voigt shows that there's more than one way of facing the world, more than one set of valuable gifts. James is academic, full of ideas. Maybeth is musical and intuitive. Sammy is stubborn, which is another word for determined. The portrait of the children's mother is a spare but deeply moving picture of depressive illness. Homecoming is sometimes a painful book to read; it doesn't spare its characters, and it doesn't offer easy solutions. But wow, it packs a powerful punch, and Dicey is a person you'll wish you could have as a friend.