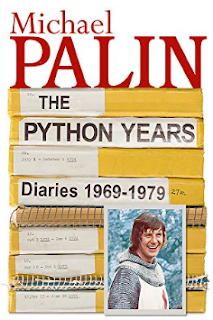 I am such a sucker for a diary! Michael Palin's The Python Years: Diaries 1969-1979 is more than 700 pages long, yet it flew by (I had to ration myself to reading one month at a time). Palin writes well, as you'd expect from a writer of Monty Python and the classic Ripping Yarns. He is an acute and sympathetic observer, an insightful listener, and a reflective person (though his moments of reflection never drag down his impressive energy level). And of course during this decade he began to mix in a star-studded milieu, as Monty Python went from weird unknowns to cult obsession to international fame.

It was fascinating to read about the irritations and power struggles within the group of six Pythons, each of them hugely talented and each wanting to express their creativity in individual ways, yet also conjuring such rich comedic magic as a group. The diaries chart the making of the original Monty Python series, as well as the films Holy Grail and ending with the explosively controversial Life of Brian, which was never a mere parody of Jesus, but had sharp points to make about organised religion and the abuse of power.

Michael Palin has always been seen as the 'nice' Python (he shares a lament at one point with Tim Brooke-Taylor, who was likewise seen as the 'nice' one of the Goodies) but he is not shy about standing up against censorship or protecting the Pythons' creative integrity. It's amusing to eavesdrop on John Cleese's money moans (which don't seem to have changed in 50 years) or meet Lorne Michaels, the American TV comedy super-producer (we have been watching 30 Rock lately, which is one of his babies). There is a sad sub-plot as Palin's father declines from Parkinson's disease, and lovely vignettes of his children as they grow up.

One aspect which is highly annoying is Palin's seemingly inexhaustible energy. He sits down to write a novel or a play and a few entries later, it's finished! (Mind you we haven't seen them actually published or performed yet.) Still, I envy him his productive output.

I enjoyed The Python Years so much, I think I might have to invest in the later volumes.