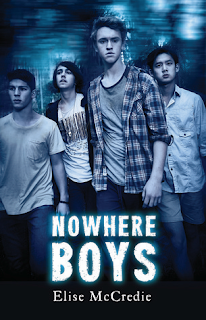 Full disclosure: Elise McCredie and I were good friends at college back in the dim and distant past, and I've followed her career as a filmmaker and screenwriter with intense interest and pride. I knew that she was one of the writers of the hugely popular Nowhere Boys television series (as well as Stateless, Sunshine (which I really loved), Ride Like a Girl and more) but I didn't know that she'd written the novelisation of the first series as well.

It's great! It sent me searching iView to watch the TV version (annoyingly I could only find the fourth series and the movie -- my own fault though for not watching it earlier). Nowhere Boys is a terrific concept where four teenagers tumble magically into a parallel world where they have never existed, and have to work out a way home. The book is very well-written: four boys are distinct and lively characters, their dilemma is poignant and painful, but also often funny, there is plenty of action and the details of the magic make sense and don't weigh down the story. And it ends with a hint that there is more adventure to follow (as we know, because there were three more series).

I thoroughly enjoyed reading Nowhere Boys and if it does pop up on a streaming service somewhere, I am definitely watching it.