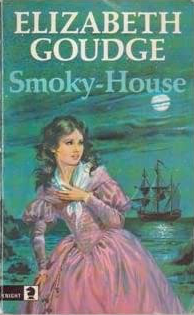 Smoky-House is definitely a minor Elizabeth Goudge, but for a long time it was the only book of hers that I actually owned -- I think I received it as a Christmas present when I was about nine. Unlike Linnets and Valerians or The Little White Horse, my real favourites, I haven't reread Smoky-House for decades, but I was surprised when I pulled it from the shelf to see how well-thumbed it was -- lots of page corners have been nibbled, which is a sure sign that I read it many times.

I'd forgotten most of the plot, which involves smuggling and the assistance of the Good People, but there were a couple of unexpected details which had stayed vivid in my mind. One was the plain second daughter Genefer (I'd never seen it spelled like that before) and her dresses of soft pale butterfly orange and blue; the other was the angels who stand round the bedposts of the children and watch over them as they sleep.

Four posts to my bed,
Four angels round my head.
Matthew, Mark, Luke and John
Bless the bed I lie upon.

For several years I used to pray this at bedtime, and imagine my own watchful angels. This little prayer caught my fancy, but there is a LOT of poetry in this book, which I could do without. There are the usual wise, resourceful animals, courageous children (including the compulsory naughty youngest), a vigorous Squire to marry the sweet eldest daughter Jessamine (that's her on the cover) and various magical beings. There is also the figure of the bitter Fiddler, who is very similar to the character of Sebastian Weber in The Heart of the Family, though the Fiddler finds his redemption far more easily than poor Sebastian.