A Leg To Stand On 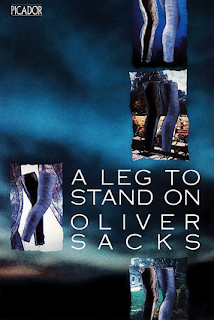 One of the ugliest covers I think I've ever seen! But I'm now committed to reading everything that Oliver Sacks has ever written, so I didn't pay any attention to the packaging, and dived into the contents of A Leg To Stand On.

This slim volume, first published in 1984, is Sacks' account of an accident and serious injury he sustained as a young man, falling down a mountain in Norway. The operation to mend the injury went well, but in the aftermath of recovery, Sacks experienced an unexpected and to him, inexplicable, sense of alienation from his own limb. He felt that this leg was an utterly foreign object, unconnected to his sense of self, unable to be controlled, horrifying and even disgusting. Eventually this feeling was overcome, but not by thinking and brooding -- only by unself-consciously doing and actually using the leg, was it joyfully re-integrated and truly recovered.

The most striking thing about this experience was the degree to which Sacks felt unable to communicate how he was feeling to the doctors, nurses and therapists, even with the advantage of his own medical standing. Only with fellow patients was he really able to express what he'd been through and discover that such feelings were quite common. Hopefully this book, and Sacks' research, has led to greater awareness.

Sacks also expresses beautifully the journey of every patient -- from the intense terror and dread of being struck down by injury or illness, the relief of rescue and sense of safety when treatment commences, the delicious sensation of being excused from normal life, when it's enough just to be still alive, and the ultimate chafing at restriction and desire to reconnect with the world again. I found this memoir extremely moving, in every sense.