I Own the Racecourse! 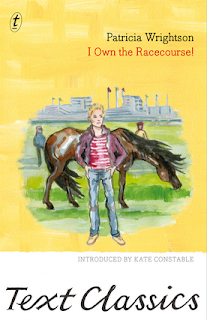 This week I was asked to take part in a radio discussion of I Own the Racecourse!, which has necessitated a quick re-read. (Tomorrow morning, 2SER Final Draft, if you're interested...)

A few years ago, I was asked to write the introduction to this new edition of Patricia Wrightson's beloved 1968 novel. I was hugely flattered, of course, but I'm not sure why Text approached me, perhaps because Crow Country had just won the Patricia Wrightson Prize at the NSW Premier's Awards, or because people were making comparisons between Wrightson's handling of Indigenous magic and the similar subject matter of Crow Country. But the magic at play in I Own the Racecourse! is of a very different kind, and nothing to do with Aboriginal culture.

Andy Hoddel is different from the other boys who skateboard and play cricket and scrounge for scrap on the streets of Appington Hill; though Wrightson never explicitly says so, he is intellectually disabled. He is vulnerable, and easily conned into thinking that he is the new owner of the racecourse. Indulged by the workers at the track, Andy's delusion becomes so deeply ingrained that, though his friends try to protect him, everyone, even the Committee themselves, end up going along with it.

I had never read I Own the Racecourse! and strangely it turned out that I had a different, very personal connection to this particular novel. My sister, born the year after this book was published, also has an intellectual disability, and I could recognise her in Andy: her vulnerability, her stubbornness, her eagerness to belong. I found it impossible to write a truthful response to the book without talking about her.

This sparked off a deep discussion within my family. Should I write about something so private? How would my sister feel about it? Did she even think of herself as intellectually disabled? Believe it or not, this was not something we ever spoke about within the family. Asking my sister what she thought, giving her the introduction to read and approve, and discussing it with her, ended up being a really therapeutic process for the whole family and something that was long overdue.

As I say in the introduction, I just wish my sister had had a group of friends like Andy's.