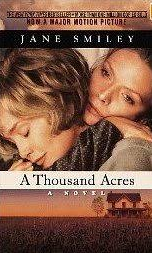 I couldn't find an image of the edition of Jane Smiley's 1991 Pulitzer Prize-winning novel, A Thousand Acres, but this is pretty close. My copy was released as a film tie-in (the movie was directed by Aussie Jocelyn Moorhouse!) and the cover put me off for a long time. You know when you have a book sitting next to your bed for months, and then finally you force yourself to read it, and you think, wow, this book is really good, I wish I'd read it sooner? Yeah... that.

I picked up this novel because it had been recommended so many times as a great book club read in a book I read about book clubs (meta, hey). Set on a farm in rural Iowa, this prosaic story felt more remote from my life than some of the fantasy novels I've read recently.

I've described the story as prosaic, but that's unfair. It's a re-telling of Shakespeare's King Lear, a play with which I'm not familiar, so I kept a Wikipedia summary of the plot open beside me as I read. Not that I needed it -- the major plot points and characters are loosely paralleled, but it's the emotional truth of the tale, and the harrowing, complicated pain that families can hide, which is the heart of the novel. This was a clear, adult, deeply satisfying read, filled with hard wisdom.