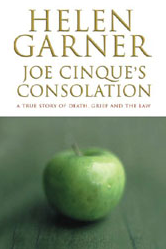 Once again, a book read years ago has drawn me to a film, which has in turn sent me back to the original book. This week it was Joe Cinque's Consolation which screened on SBS on Friday night. Though Helen Garner's book deals with the legal and moral aftermath of the killing, the film focuses instead on the events leading up to Joe Cinque's death; so when I returned to the book, I had a clear picture in my mind of what had gone before.

I say a clear picture, but in fact the events are far from clear; they swirl in a muddy, ambiguous tangle of intention, possible psychosis, passivity and grief. Cinque was drugged with Rohypnol and then injected with heroin by his girlfriend, Anu Singh, who had been talking for a long time about suicide and was judged to have been suffering from mental illness. Her friend Madhavi Rao helped her acquire the heroin and plan the bizarre "farewell" dinner parties which preceded the killing -- she was cleared of all charges.

Garner grapples with the questions of culpability and guilt that this scenario throws up. If Singh was mentally ill (something Garner seems to never quite accept), then who bears responsibility for Cinque's death? Did Rao have a duty to prevent Singh from acting, to call the police, to call for an ambulance? Legally, apparently she did not; but what about morally? Again and again Garner circles back to the brute fact that "Joe Cinque is dead." What is his death worth? Who will pay? She befriends Cinque's wounded, dignified parents, and ultimately seems to see her own moral duty as a kind of bearing witness to their pain, to making sure that this gentle young man Joe is not forgotten.

I've read absolutely scathing reviews of this book which find Garner racist, sexist, judgmental, self-absorbed. I'm inclined to be a little more lenient, and I think Garner is not unaware of her own compromised position in telling this story and the sides she chooses. But I guess I choose to be forgiving mostly because of the sheer crystalline quality of Helen Garner's writing. I raced through this book in less than an evening, utterly gripped, thrown this way and that by the force of the big questions Garner ruthlessly pursues and is brave enough to leave unresolved.
Posted by A latte beckons at 2:38 PM