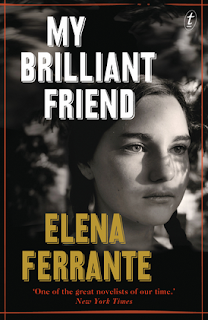 Appropriately, this book was a birthday present from my brilliant friend, Sandra Eterovic. I think I felt rather intimidated about reading this novel, as the series has received so much praise -- but now the Neapolitan fever has cooled somewhat, I've finally managed to hop onto the Elena Ferrante bandwagon (have I mixed enough metaphors there?)

My Brilliant Friend, as everybody surely knows by now, is the story of two friends, Lila and Lena, growing up in a poor district of Naples in the 1950s. Right until the very end, I assumed that the 'brilliant friend' of the title was Lila, being described by Lena, the narrator; but it turns out that it's Lila, describing Lena. The two girls are both very clever, sometimes rivals, each driving the other to greater feats of excellence, but as Lena notes, they seem bound by some mysterious fate whereby Lila thrives when Lena's life is hard, and vice versa.

This is a very people-focused novel, with little physical description of the setting. But it still paints a vivid picture of 1950s Naples. Maybe it helped that I've been there? My heart was wrung for these two young girls who are forced to grow up so fast, the age of my own daughters. Despite their brains and their strength, they are so much at the mercy of their parents, the local boys and men, the judgements of the neighborhood. You long for them to burst free and taste the joys they deserve, and there are hints that this might be possible. I just hope I don't lose track of all the characters and their complicated, intertwining histories.

Three more books to go, and I'm hooked.
Posted by A latte beckons at 1:12 PM