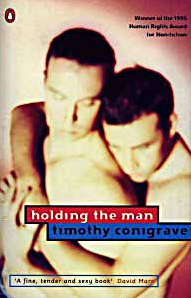 I happened to catch the 2015 film of Holding the Man the other night on SBS (it was excellent) and it prompted me to hunt out the book, which I hadn't read since its first publication in 1995.

Holding the Man is a memoir by Timothy Conigrave, about his relationship with John Caleo. They fell in love as schoolboys at a Catholic private school in Melbourne in the 1970s, moved to Sydney, and became caught up in the horrific AIDS epidemic of the 1990s. Conigrave writes simply and almost unbearably movingly of his and Caleo's illness, and Caleo's death. Conigrave died ten days after completing Holding the Man, and it was published posthumously to great acclaim.

I had forgotten how funny and honest, and how sexy, the early parts of this book are, perfectly describing the thrills of young love (especially forbidden love!). But the prejudice of their families, and the stigma that clung to AIDS, are painful to read, and timely in the current climate. It would be nice to think that we have progressed as a society in the last twenty years, and I believe we have; but only up to a point.

Reading about Conigrave and Caleo's treatment brought back all the terminology that was part of our lives in the 1990s, words I had forgotten -- AZT, T-cell counts, PCP, Karposi's sarcoma. But the story of their unwavering love is very moving, and I was forcibly struck by the account of the loving friendship and support that surrounded the couple. Though the epidemic was a terrifying and devastating time, it did prove the amazing strength and generosity of the gay community. That's a good thing to remember.