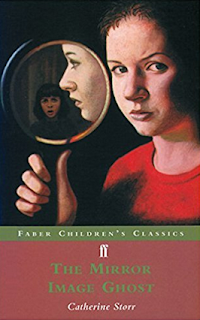 Picked this up at Brown and Bunting because I admire the powerful Marianne Dreams by the same author (Catherine Storr). Annoyingly, Marianne Dreams has gone missing from my bookshelves, I must have lent it to someone and neglected to chase it up.

I wasn't aware of The Mirror Image Ghost but it's an interesting, eerie little book. It's probably too light on plot to appeal to most of today's junior readers, but I thought it wove together several story strands with deftness and subtlety, and I would have loved it if it had been around when I was about ten or eleven.

Lisa's mother has just remarried and now Lisa finds herself saddled with a French step-sister and -brother whom she intensely dislikes. The tensions of a blended family are well-drawn. Her beloved grandfather lost his family in the Second World War but no-one wants to talk about exactly what happened (the adult reader can guess easily, but a child reader is led gently toward the revelation of the Holocaust). Meanwhile Lisa is glimpsing snippets of the past in an old mirror; will she discover the secrets on her own? And is she herself a part of the story?

The Mirror Image Ghost doesn't have the punch of Marianne Dreams, and though it was first published in 1994, it has the feel of a much older book. Not a bad thing as far as I'm concerned, but it might put other people off!