Memory in a House 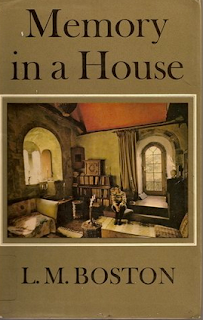 A quick read between the cracks -- very kindly lent by Pia at book group, where we were discussing The Chimneys of Green Knowe. I devoured this book in a single sitting! It's Lucy Boston's account of her rescue and restoration of the house that Green Knowe is based on, complete with floor plans and photographs. I am going to copy the floor plans and tuck them away for reference with my Green Knowe collection so I can picture the house more clearly.

It turns out that the Manor, Hemingford Grey, is much smaller than I imagined from reading Boston's exquisite novels -- it's almost just two-up, two-down, with extra bedrooms in the attic. The core of the house is very old indeed, a Norman hall from the twelfth century, with alterations, additions and demolitions in the generations since. Boston painstakingly stripped away the awkward adaptations of the intervening years and allowed the history of the house to breathe. Since her death, the Manor has been cared for by her daughter-in-law Diana, and can be viewed by the public. While Green Knowe is home to a number of beloved spirits, the Manor also hosts some ghostly presences which are less well defined.

It's obvious that Boston's love and respect for the house became the over-riding passion of her life, and the direct inspiration for her writing. It seems that every book she wrote had its roots in the house, not just the Green Knowe books, but also her adult novels and memoirs.

It was lovely, and unexpected, to discover that Boston was also a noted quilter -- her patchworks gave her the idea for The Chimneys of Green Knowe. Her designs can be found on the internet, and they are truly beautiful, works of art in their own right.