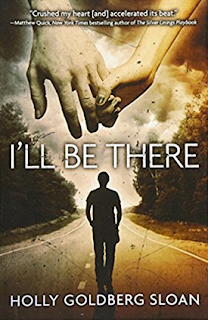 Bought on the Kindle for our next Convent book group meeting, with the theme of 'Homelessness.' We've actually already read Holly Goldberg Sloan's Counting By Sevens, but I'll Be There was her first novel, after much experience writing screenplays.

This was a hugely successful debut, so Sloan doesn't need any boosting from me, and I must confess, this novel didn't really work for me. The story certainly rocketed along, with plenty of action, loads of feels, and all the loose ends tied up neatly at the end. Sweet Emily and sensitive Sam, our star-crossed lovers, seemed too perfect to be true, and came across as younger than seventeen and eighteen respectively. It's no surprise that Sloan, with her screenwriting background, is a master of pace and plot. And the themes of caring and compassion are definitely worthy ones.

Plod, plod, plod! I know this sounds like a contradiction, because the plot was fast-moving, chopped into swift digestible chunks -- but within each short chapter, the prose was painfully clunky. There were a few bonus chapters of the sequel included at the end of the Kindle edition, but (gulp) I couldn't bring myself to bother.