Not If I See You First 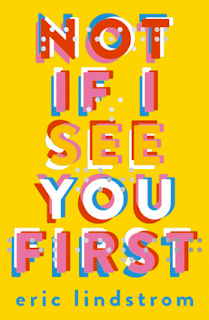 Another book read in a galloping hurry, as our book group meeting is tomorrow, and the library didn't supply Eric Lindstrom's Not If I See You First until last Friday. It's fat, but the print is large, fortunately, so I was able to race through it.

As I read the first chapter my heart sank slightly, as we discover in short order that our narrator, Parker, is blind; her mother died in the car accident that took her sight; and her father has also recently died. To add to her trauma, her aunt and family have moved into her home to care for her and insist on doing things for her when she's actually very independent. This seemed to set the scene for one of those YA books I loathe, where off screen family death raises the stakes artificially high, AND we have disability thrown in for good measure. Plus the teens are all Fault-in-Our-Stars-style bitter and whip-smart. I was all set to hate this novel!

Well, it improved as it went along (though it probably went along a little too long for my liking). The conceit of the blind narrator works really well, and it was cleverly used by the author a few times to test the reader's assumptions, too, about race and appearance. We are in the same position as Parker -- we can only judge characters on what they say, not how they look. This means that Parker gets a few things wrong (that's kind of the theme of the novel) but it also means that she has to judge people on their actions, rather than their appearance. (I guess this means that a film adaptation won't work for this book!)

I learned a lot about the experience of a blind teenager, and had my own assumptions tested -- for instance, music is not super-important for Parker. She can't waste precious audio-book listening time on music if she wants to keep up with classmates, and she can't multi-task listening to music with reading or jigsaw puzzles or flicking through her phone. I also liked the way she wears a blindfold as a fashion statement. For me, the book dragged a little during the angsty relationship conversations; but it really took off when Parker runs. I would have liked the balance tilted further in that direction.