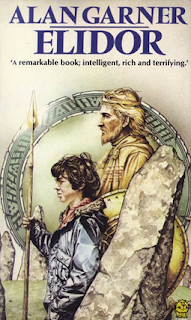 I've had Alan Garner's third novel, Elidor, on my bookshelf for I don't know how long, but I'm ashamed to say that until now, I've never actually read it. I think I feared another Weirdstone disappointment. But I needn't have worried -- Elidor is a much, much better book than either Weirdstone or The Moon of Gomrath, and in this novel, you can see Garner truly beginning to come into his powers.

Despite the high fantasy cover, Elidor is actually grounded firmly in our world. The excursion of the four children into the mysterious, blighted land of Elidor comes early in the book, and it's brief. They return to their own world as guardians of four precious items, disguised in our world as a chipped bowl, a 'sword' of wooden planks, a stone and an iron bar. The children hide the treasures, but it's not long before the enemies of Elidor come searching.

The everyday creepiness of the Treasures' power is wonderful -- their 'charge' interferes with radio signals and electricity, making kitchen tools come to life even when they're not plugged in. This part of the story reminded me of Susan Cooper's The Dark is Rising, where high fantasy and the everyday  intersect in a similar way. I also loved the humdrum disguise of the Treasures -- and which imaginative child hasn't known that the cracked china dug up in the garden was really a magical chalice, or waved a stick for an enchanted sword? Or was that just me?

Elidor has been criticised for not elaborating more fully on the alternate world; but I think it's all the more powerful for being elusive and oblique. The predicament of Nick, the eldest, who tries to explain away their experience as a mass hallucination, foreshadows the suffering of the adult Colin in Boneland, who also has to deal with the aftermath of a magical encounter that can't be rationally accounted for. Originally written as a radio play, Elidor is a taste of wonders to come in Red Shift and The Owl Service.